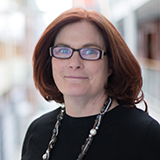 Jane is Director of the Institute for Future Media and Journalism (FuJo), www.fujomedia.eu. She is currently co-PI on an EPA project on climate change coverage in Irish media and is communications director of a COST project on populist political communication with an emphasis on media and social media. She is deputy research director of the Irish Constitutional Convention and a member of the ECPR standing group on Democratic Innovations and co-convener of the PSAI specialist group Voters, Parties and Elections. She also works on media monitoring. Jane is a frequent contributor to broadcast and print media, has given evidence at parliamentary committees and is a former journalist having worked as Economics Editor at The Irish Times and for other papers such as The Sunday Times and Sunday Independent.