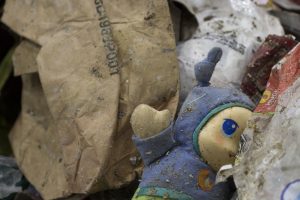 Leanne Olson is a photo-based artist born in Toronto and raised in Edmonton. She has a Bachelor of Arts with a major in Film & Media Studies from the University of Alberta and has maintained a photography practice since 110mm film was around. Olson’s practice centres on documenting impermanence and adaptation to changing environmental conditions. Olson also has a history of engaging with the community, with experience as a lead artist in the print studio at the Nina Haggerty Centre for the Arts and as an ongoing community art project facilitator with the Bissell Centre. In 2017, she completed residencies at the Banff Centre for the Arts and Artscape on Toronto Island, and her solo show, Last Resort, opened at SNAP Gallery. Since February of 2018, Olson has been the first artist in residence at the Edmonton Waste Management Centre.

The subjects in Olson’s photographs are often described as otherworldly, yet, they’re real, they’re here and they are of the era of right now. Interested in reflections, projection and the societal necessity to document the development of ego, Olson’s photographic work is driven by a curiosity in the intersection of behavioural science and environmental adaptation. For four years, Olson photographed disappearing Alberta lakes and sulphurous streams. Since February, Olson has been exploring the triangular formations of the remnants of consumption in her artist residency at the Edmonton Waste Management Centre.