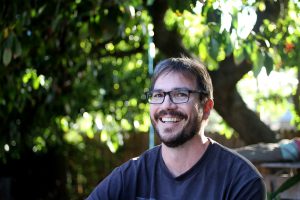 Peter Kalmus is a climate scientist working at NASA’s Jet Propulsion Laboratory (speaking here on his own behalf). He has a PhD in physics from Columbia University and a BA in physics from Harvard. He spent eight years searching for gravitational waves as a member of the LIGO Scientific Collaboration, until his growing awareness of the climate emergency compelled him to switch into Earth science. These days, he uses satellite data, in situ data, and models to study the rapidly changing Earth, with a focus on boundary layer clouds; recently he has also begun research on how climate change will affect coral reefs. He has authored or coauthored over 60 peer-reviewed scientific articles.

At home, Dr. Kalmus explores how dramatically reducing carbon emissions can lead to a happier, more connected life. He enjoys orcharding, beekeeping, and backpacking with his family. He is the author of the award-winning book Being the Change: Live Well and Spark a Climate Revolution (New Society, 2017) and the principal subject of a new one-hour documentary based on the book. He is a contributing editor and columnist at YES! Magazine; his writing has been featured in The Guardian, at Grist.org, and elsewhere; and he has been interviewed on CBC Radio. He was selected as a member the 2018 Grist50. He is the founder of NoFlyClimateSci.org.